I bought a set of wireless headphones for very cheap (< €5) off eBay. I use a 2x 15W amplifier board to hook up a spare set of JBL Control 1C. The amplifier is powered by a 12V 3A power supply off eBay. The volume control and tone adjustments are handled by a TDA7439 4 stereo input sound processor IC. The resulting product should go in a case and offer some controls, such as volume, equalizer, and mute.

The wireless headphone set was a great deal. It comes with a 5V wall wart PSU, a transmitter, a Li-Ion battery, two speakers and a receiver unit.

Luckily the extraction of the remote receiver (RX) circuit was even easier than I had hoped for—the RX is socked on a daughter board: 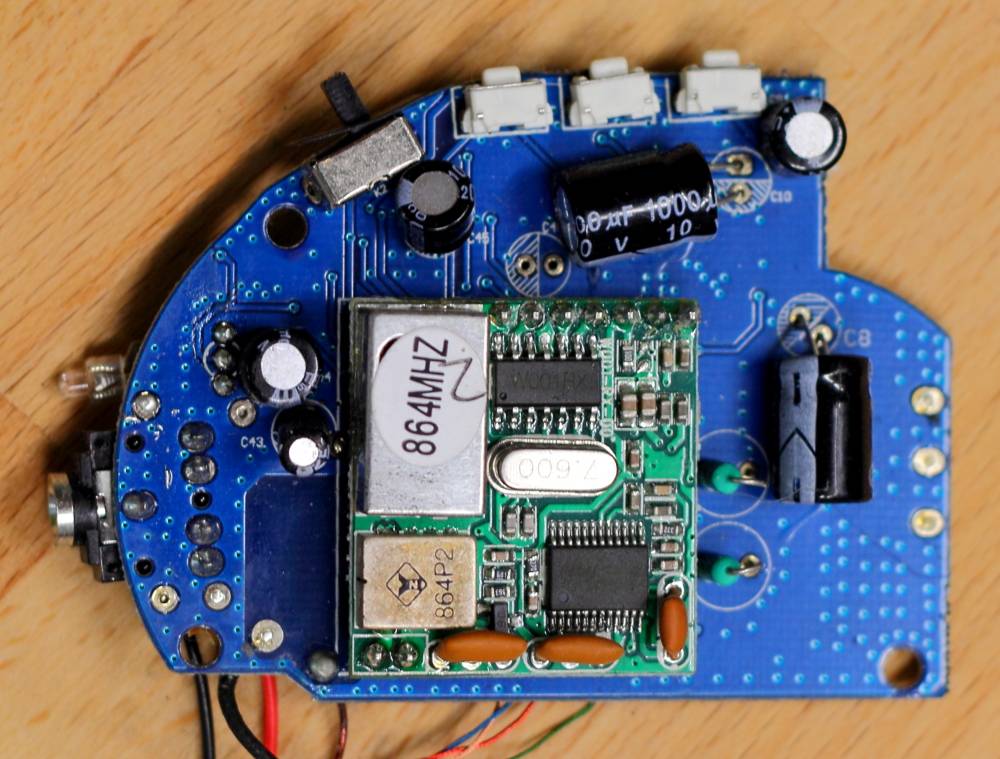 The receiver board contains a presumably custom IC labeled W001RX and a set of other ICs I cannot identify. Reverse engineering the rxboard signals gives this pinout: 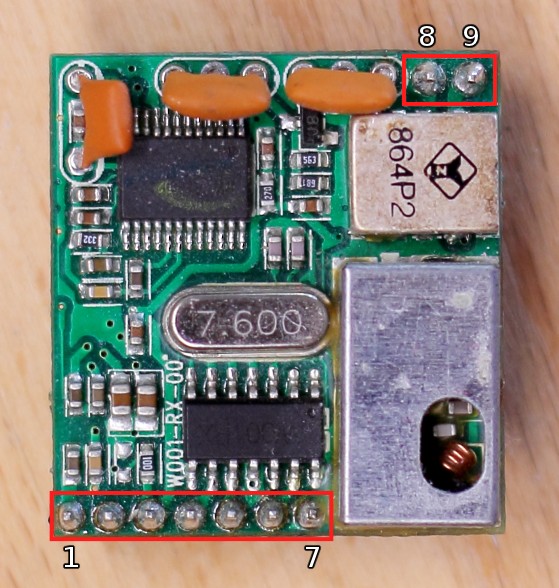 /SCAN is kept low in operation; a positive edge makes the circuit jump to the next channel. There are 3 channels supported, and it defaults to a fixed channel on power on. If you want to select a specific channel, you’ll have to hop to it by triggering /SCAN once or twice.

/TUNED is pulled low by the circuit if it detects a carrier, otherwise it is high.

All files in KiCAD format are available from a Gitorious repo.

The circuit hosts power input, power out for the amplifier, and a set of honky capacitors to reduce switching noise from the PSU and amplifier. Two voltage regulators produce 8V for the audio processor and 3.3V for the rest of the system.

An ATMEGA8 is used for user input and control. As far as I can tell an ATMEGA48 or related could be used instead.

A 10-pin IPS (In System Programming) header allows for firmware upgrades for the Atmel µC.

Inputs come from the receiver board and from an optional external input such as a mobile audio player. The central part of the circuit is the TDA7439 with 4 stereo inputs and tone control. The µC connects to the audio processor via I²C bus and controls input channels and tone/volume settings. The TDA7439 requires a fair amount of discrete components for tone control, and I simply used the values of the datasheet’s test (and only) circuit. I added an AC coupling capacitor to the outputs to remove the 4V DC offset.

The TDA7439 comes in a SDIP30 package, for which it is virtually impossible to obtain a socket. Therefore I designed a breakout board from SDIP32 to DIP32-600, and the main board uses a DIP32-600 socket. Most board inputs are screw terminals, except for the panel and ISP connectors which are male IDC headers.

The audio part (left) and the digital part (right) have their own 2-sided flood-filled ground planes. Both sides are only connected on one spot to minimize digital noise coupling. In the end I did not connect front and back planes with additional vias, but the existing through-hole ground connections should be enough. The ground zones are not shown in the board layout to improve clarity.

The board shown here is revision 2, using SMT components.

Interfacing with the TDA7439

With the first board back from the fab, I put on all components except for the AVR and the wireless module in order to check for design problems. I hooked up my Bus Pirate to the I2C bus via the AVR socket: 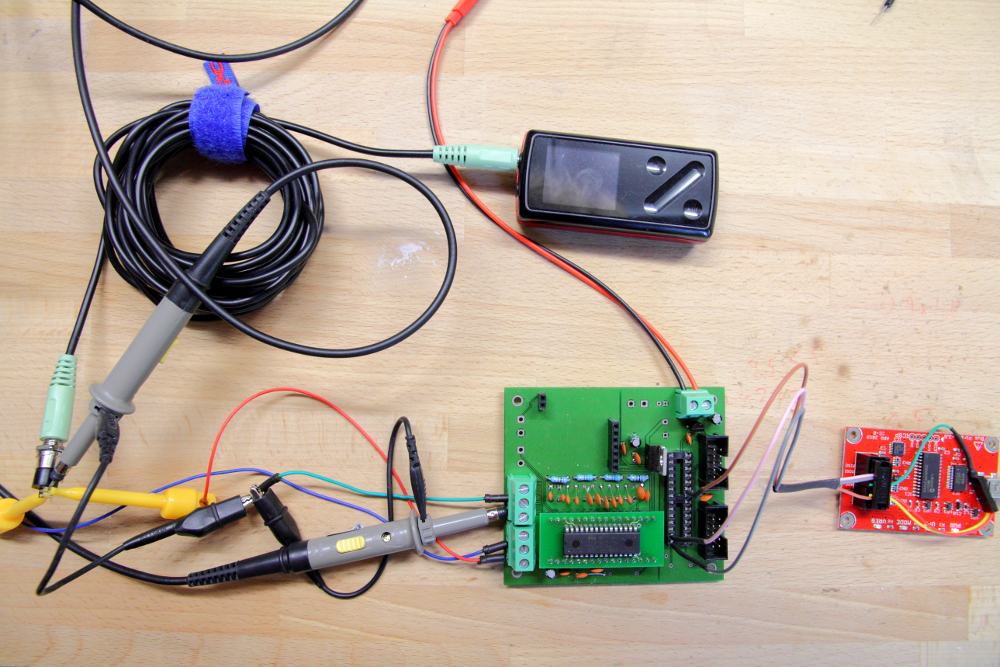 We initialize the TDA7439 to produce some output signal using the bus pirate:

The I2C sequence breaks down to:

Now the output comes to life: 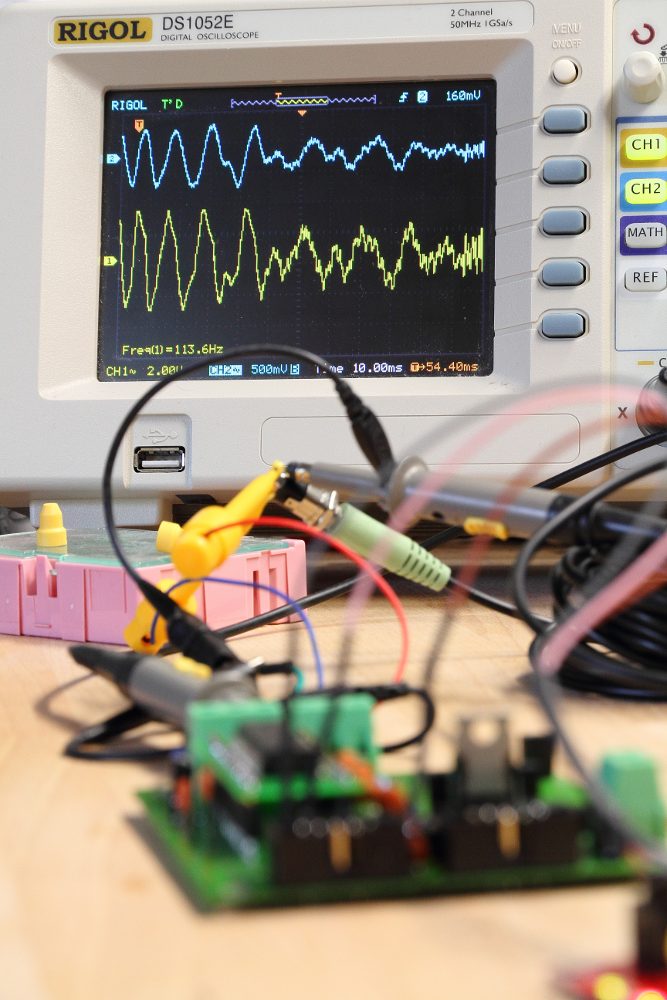 Because I didn’t have sufficiently large DC blocking ceramic or film capacitors, the signal is a bit distorted; slopes do not match properly, and sometimes you can see a phase offset. I have the impression that the input trails the output at times, but that of course doesn’t make any sense.

The schematic of the amplifier shows that on the input line are a 0.1µF cap to ground; then a 10µF cap and a 20k resistor in series (plus some biasing circuitry) go into the amplifier chip.

The amplifier chip is a TA2024 class D amplifier. It requires between 3.5V and 5V input for a logic high for the SLEEP and MUTE lines. However, the AVR on my receiver board circuit runs at 3.3V, with 8V available for the TDA7439.

Looking at the schematic, the MUTE board input forms a 20k/20k voltage divider to ground; the SLEEP input to the board goes directly to the sleep pin of the TA2024, with a 20k resistor to ground. I will remove the input resistor for MUTE, so that both SLEEP and MUTE are conditioned the same way. On the controller board, one 12k resistor per signal forms a voltage divider from 8V to 5V, and each a N-channel MOSFET lets the µC to pull this signal to GND.